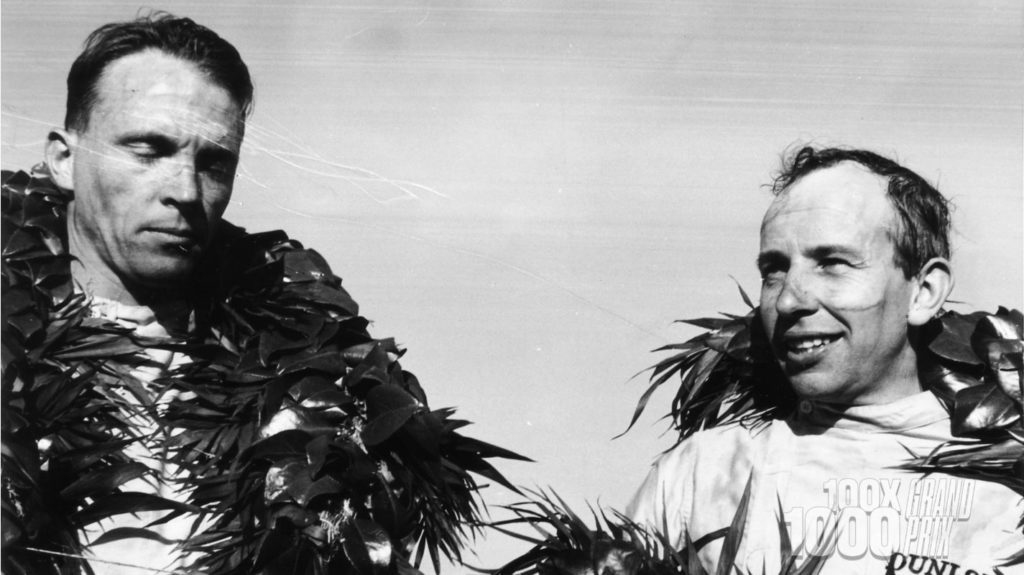 The 1964 season had reached the grand finale. It would be the third time that the title had gone down to the wire: in 1958 Ferrari’s Mike Hawthorn and Stirling Moss in the Vanwall and in 1962 when it was between Graham Hill for BRM and Jim Clark in the Lotus, so always a Brits-only affair. In fact the United Kingdom went one better in 1964, fielding all three contenders for the title that would be decided in the Mexican Grand Prix. Leading was Graham Hill for BRM on 39 points, with John Surtees on 34 for Ferrari, while Clark was four points further down in the Lotus. In the battle between the Constructors, Ferrari led on 43 points, from BRM on 42 and Lotus on 37.

However, the regulations stated that a driver could only count his six best results from the ten races on the calendar, so that Hill’s lead was not as strong as it looked. Mr. Consistent par excellence, he would have to drop a result if he did better than fourth, so it was as though his lead over Surtees was only two points and that over Clark, six. The BRM man would take the title if he won; if he came third and Surtees did not win; if Clark did not win and Surtees did no better than third. The Ferrari driver needed a win or a second place, with Hill no higher than fourth. Clark would have to win with Surtees no better than third and Hill no higher than fourth.

The Mexican circuit is located at 2500 metres above sea level, inside a large park and sports facility not far from the centre of Mexico City. Racing at altitude meant that, because of the rarified atmosphere, the engines were about 25 horsepower down. Even tyre behaviour was affected, making it an intriguing and complicated challenge for the engineers and mechanics, to the extent that in practice, Clark ran his previous year’s Lotus 25B, whose behaviour was well known to the engineers, as well as the new 33 which he eventually opted for.

Qualifying confirmed the Scotsman had made the right choice, as he took pole position in 1’57”24, 86 hundredths better than Dan Gurney in the Brabham, 1”3 and 1”4 respectively faster than the Ferraris of Lorenzo Bandini, running the 12 cylinder engine, and Surtees in the V8 powered . Hill was sixth, 2”56 off pole. Worth noting that, as in the previous United States Grand Prix, the Ferrari were not in their usual red livery, but sported the colours of the American cars. This was because the entrant was not Scuderia Ferrari but the North American Racing Team (NART) run by Luigi Chinetti, the importer and a friend of Enzo Ferrari. The reason for this was down to a disagreement between Ferrari and the Italian sporting authority which, according to Enzo, had not supported him enough when it came to homologating the 250 LM for endurance racing. Ferrari ask for it to be homologated as a GT car but the decision was taken that it had to race as a prototype. Following this spat, Ferrari decided to return his constructor’s license to the Italian authorities and entrust the cars to NART, which had therefore painted them in the blue and white national colours of the United States.

Clark got a perfect start, while Surtees had a few problems and moved off slowly as did Hill, because the strap on his goggles let go right before the start and he lost time fiddling with the spare ones. At the end of the opening lap, Clark led by two seconds from Gurney and Bandini, with Hill and Surtees tenth and 13th respectively. After a further five laps, they were up to sixth and seventh and then fighting for fourth spot, while on lap 18, Clark led Gurney, Hill, Bandini and Surtees.

Ten laps later and Bandini began to put Hill under pressure and on lap 30, at the hairpin the Englishman waved his fist at the Italian, to indicate he was getting perilously close at certain points on the track. The collision came a lap later when the Ferrari attacked the BRM at the hairpin again and both of them spun. They got going again but were overtaken by Surtees who moved up to third. The Englishman’s BRM had sustained damage which called for two pit stops and effectively put him out of the running. Bandini was in great form and even managed to catch and pass Surtees.

With eight laps to go, Clark who was leading overshot at the chicane, sliding on some oil. On the following lap, the Scotsman realised the oil was actually coming from his own car: an oil line had broken, there was nothing to be done except try and get to the finish. He slowed down trying not to move the car around too much, but he started the final lap with his arm up and thick white smoke pouring out the back of his Lotus. Shortly after that, Gurney and Surtees who had once again caught Bandini, passed him and were heading to the finish line in that order.

The thrilling finish meant John Surtees had won the title by a single point from Hill, the first and only time a motorcycle world champion also won the Formula 1 title. Now he was really a hero of two worlds. The party was complete, as Ferrari also won the Constructors’ championship, the second time the Maranello marque had done so.